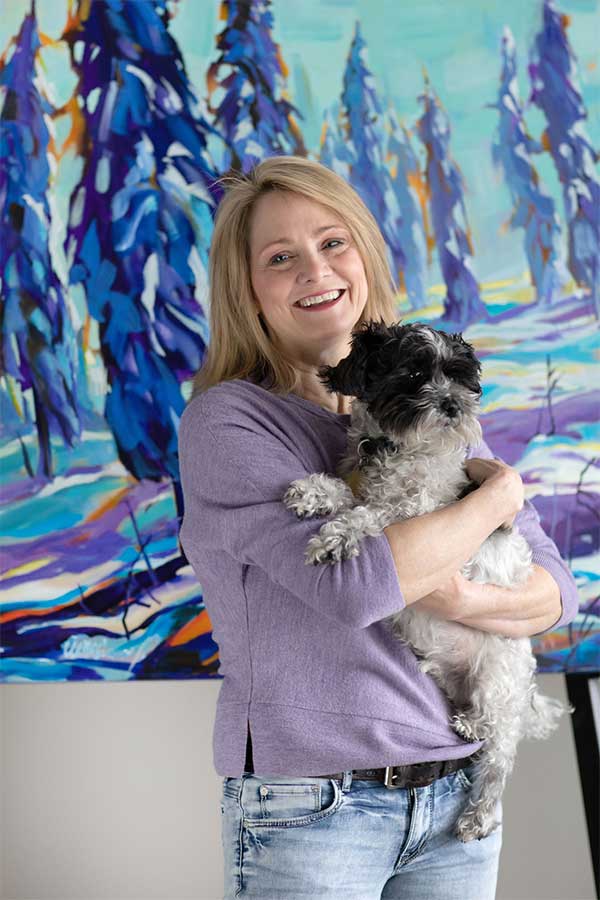 It took me a long time to accept the idea that my artistic voice would only sing when I embraced who I really was as a painter. I am an emotional painter; I feel my way around a painting, seeking to share my connection to the piece rather than seek perfection. My work is a compilation of seemingly random strokes, a story woven out of paint. It is a gestural creation, made with layers and layers of color and marks on a canvas.

I have a lifelong connection to the land and its creature. Maybe it is that extension from my childhood, growing up on the family farm.  My current work shifts between wild animals and landscapes. I prefer the angles and assertions of larger brushes that define spaces. In both landscapes and animal paintings, I will use brushstrokes to break up the image, asking the viewer to address the idea of a slice of reality, or a breaking of a linear plane. Each plane seeking a stable path to weave together with what exists around it. I seek this fracturing as a representative of a changing environment. A seemingly quiet moment is broken up by disappearing elements or marks of light as if we are drifting in and out of a storm, or a “splash” that may or may not have happened. Water or the suggestion of water is pervasive in most of my work. In any space that becomes abstracted, I seem to drift back to this element and its woven reflective qualities. This to me represents the fragile nature of things and the idea that the painting captures a moment that cannot be duplicated. 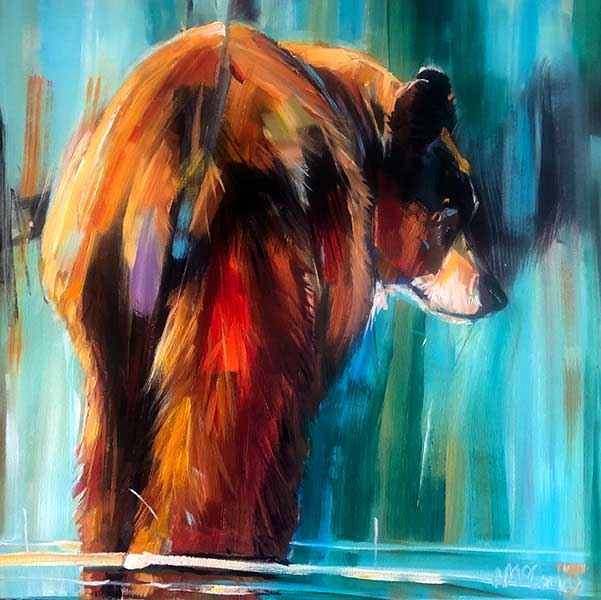 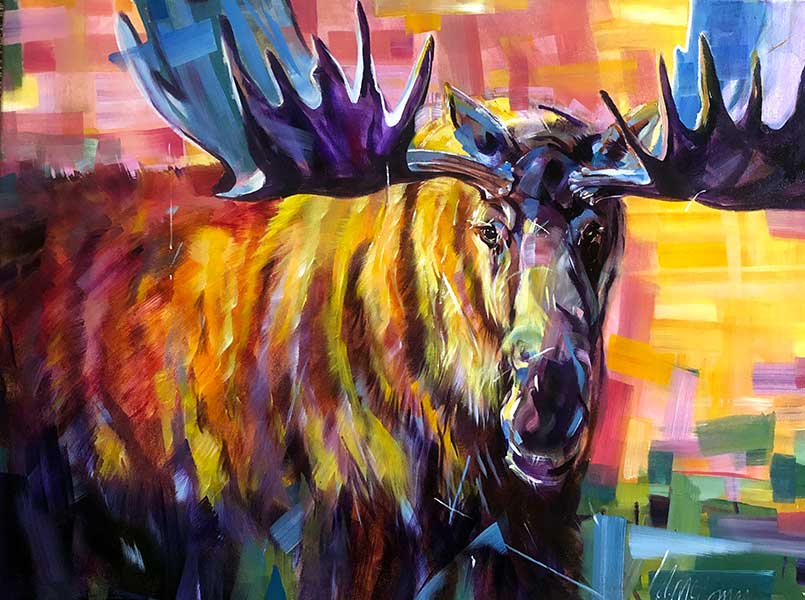 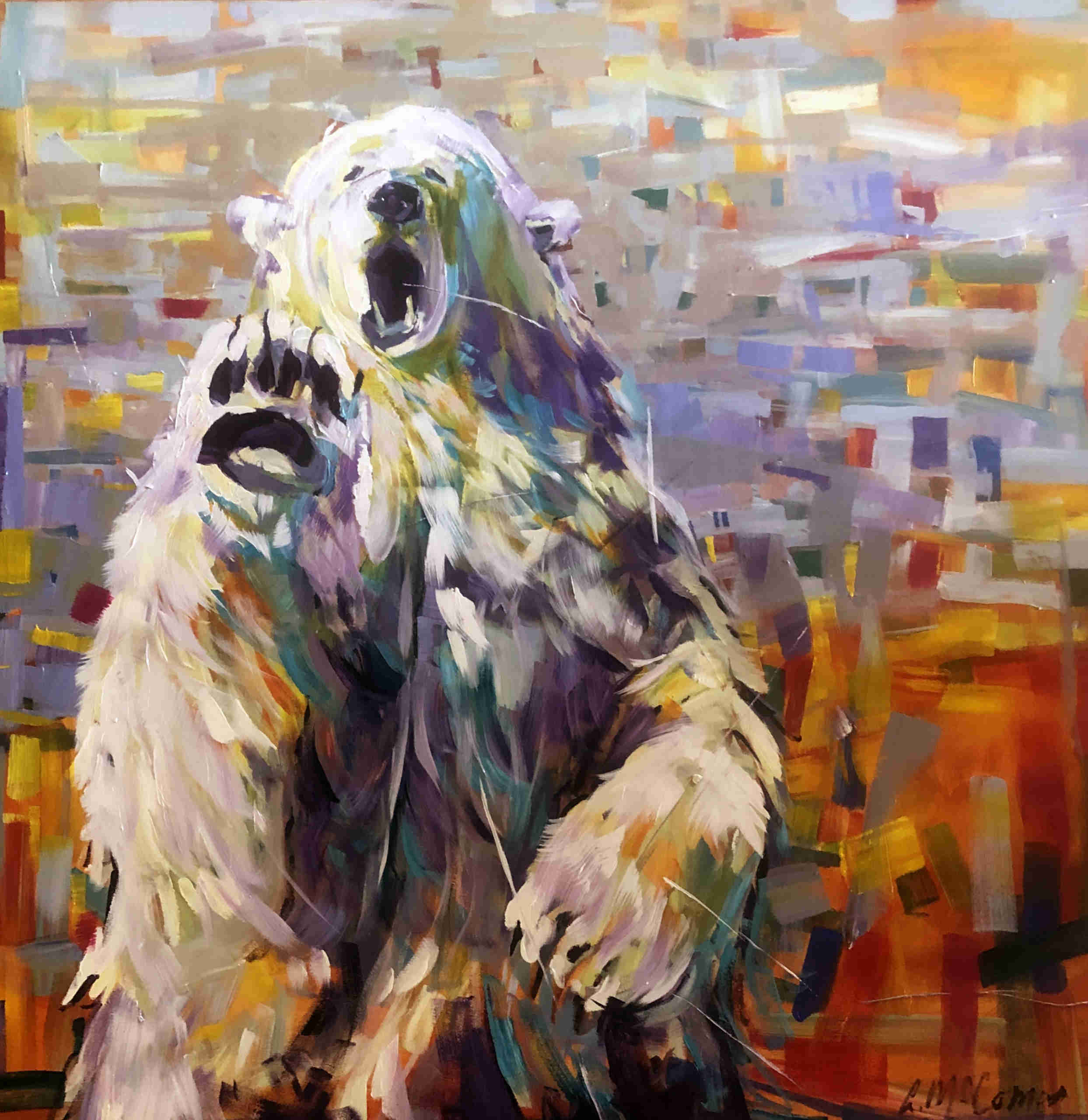 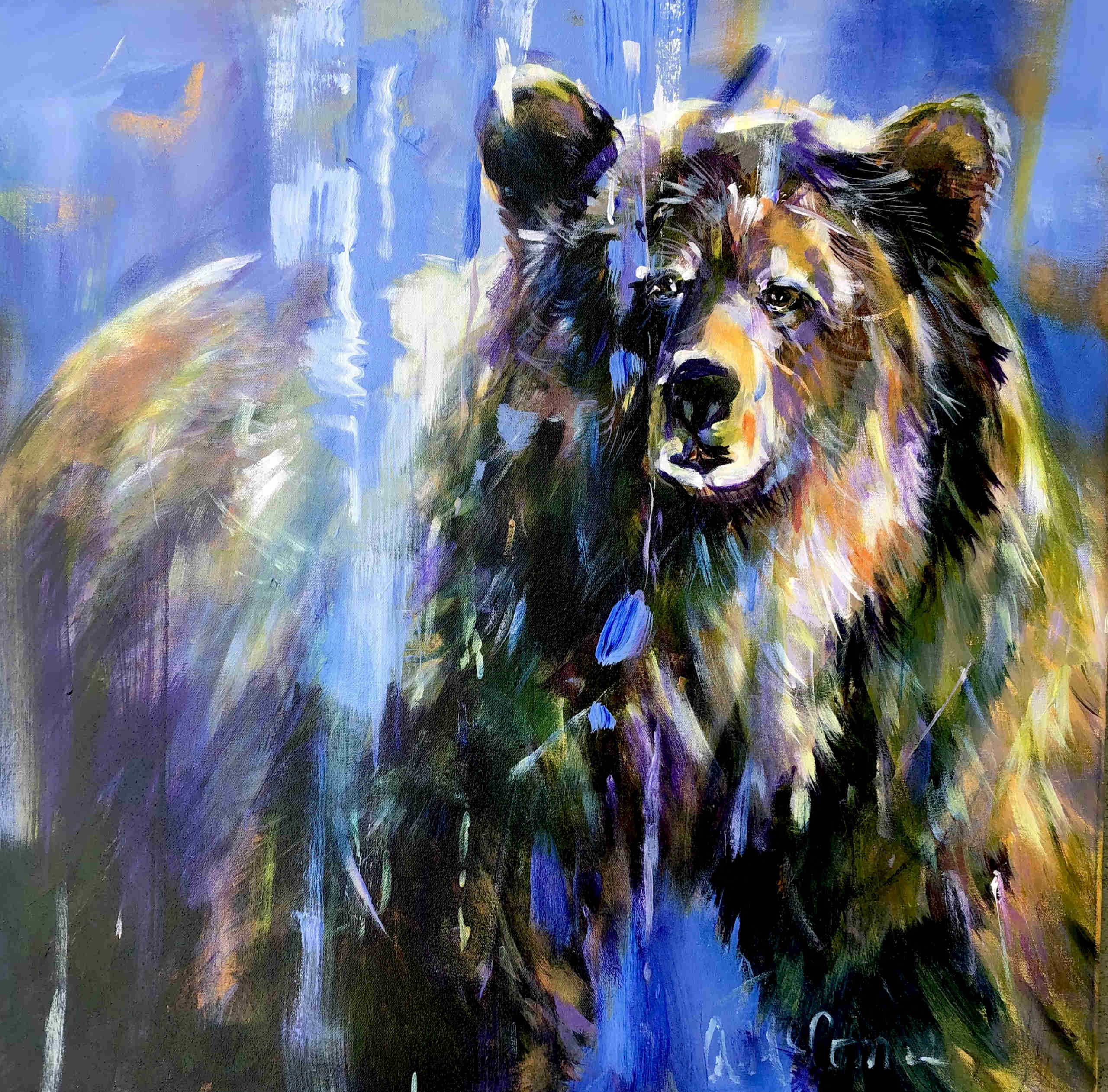 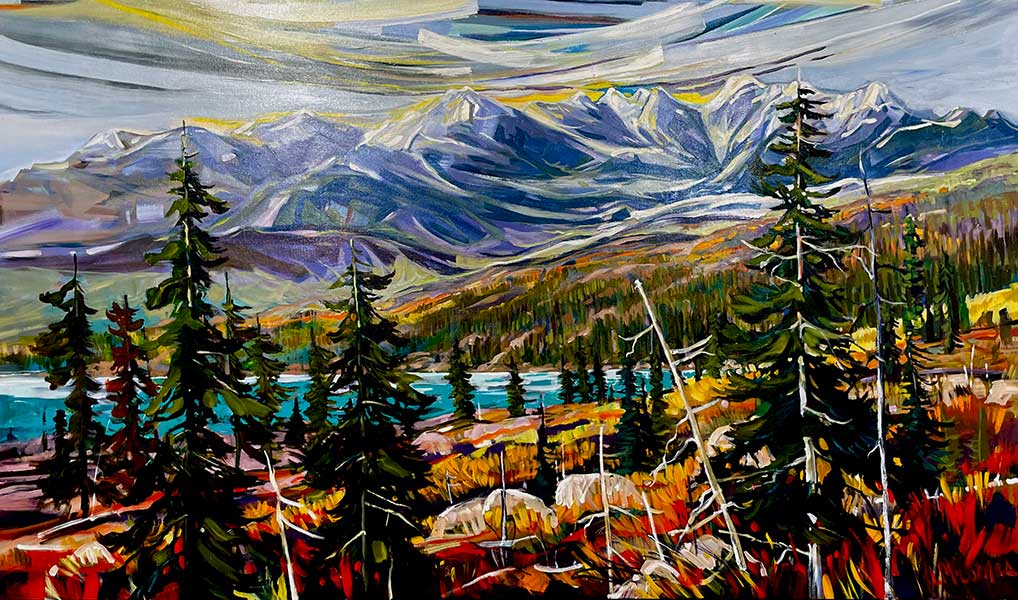 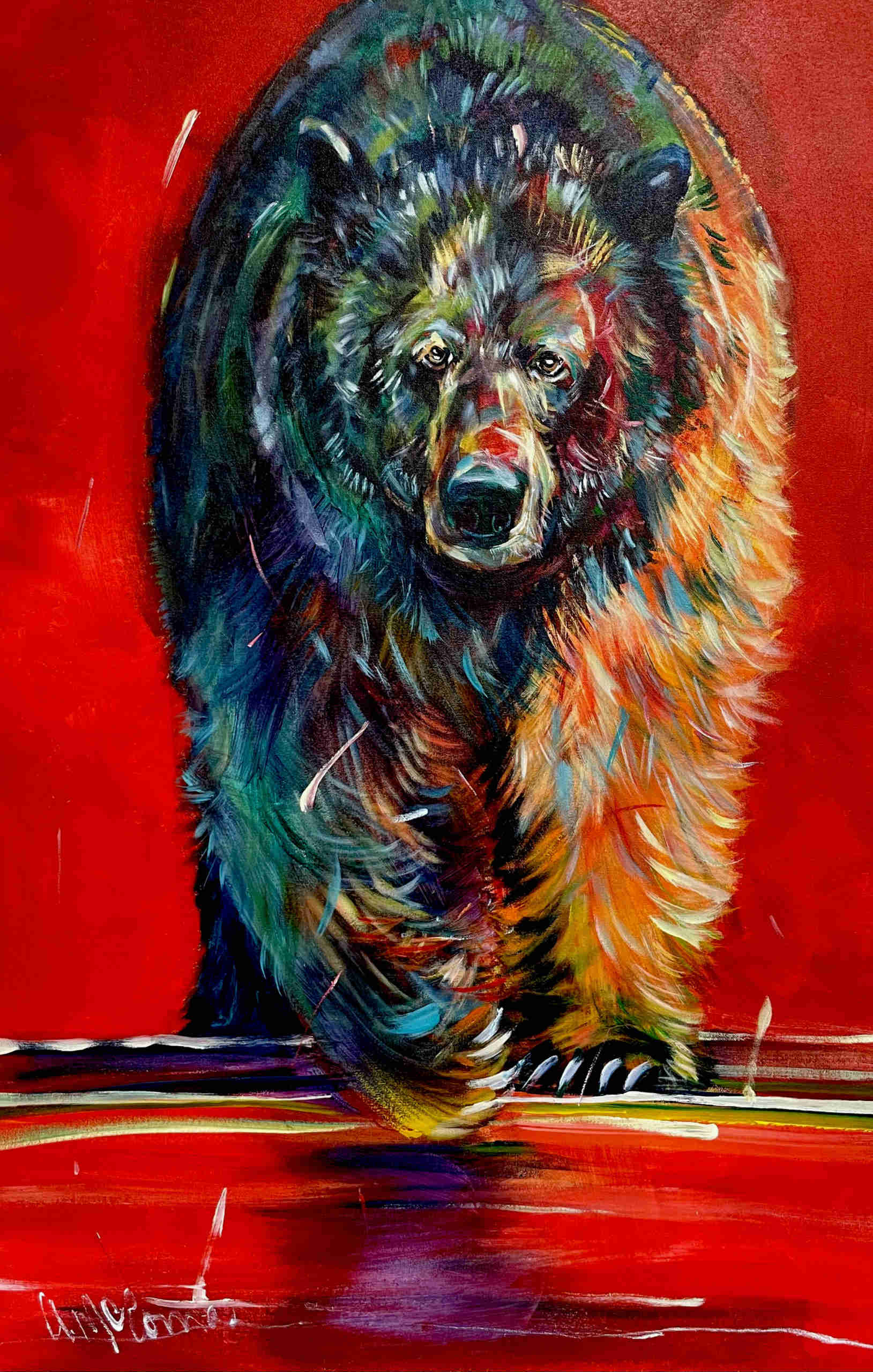 I was raised in a small town where my family worked the land in a modern-day co-op for my grandmothers five children and their families. I grew up farming and playing in the woods, creating spaces out of fallen tree branches and weaving them into walls for forts. Here I am today, back to the childhood spent in the woods, reconnecting to the land, only this time weaving brushstrokes across a canvas, creating connections to the land and its creatures with paint.

I was indelibly struck by the co-existence of people and wild animals in my Kelowna neighborhood, which included deer, coyotes, and the occasional bear. One memorable incident was a black bear, charging down the hill towards the front door of my house (we had an empty lot behind us), then veering off course at the last minute as he got distracted by a startled deer hiding in grasses. I later learned that given the time of year, the bear was most likely drunk off the grapes that he had eaten; end of season discards that had fermented in the vineyards. I was moved to begin a series of bears and deer, hidden amongst houses. My signature piece was “Cityscapes” a bear whose habitat was eroded by the encroaching city.

My work continues this theme, but it has morphed into the angles and assertions of larger brush strokes that define spaces. In both landscapes and animal paintings, these brushstrokes break up the images, forcing you to address the idea of a slice of reality, or a breaking  of the linear plane. Each plane seeking a stable path to weave together with what exists around it. I see this fracturing as representative of a changing environment. A seemingly quiet moment is broken up by disappearing elements or marks of light, as if we are drifting in and out of a storm, or a “splash” that may or may not have happened. This to me represents the fragile nature of the scene you are observing. I am painting the intersection between the ideal and the future.